Matt Shryock and I completed the Link-Up last summer, and I’ve been meaning to write about it ever since.  It’s coming up to just about a year ago, and Julianne Dickerson, April McAnly, and Abby Jahn’s recent successful sub-24 hour accomplishment reminded me it’s time to get it out there.  And because I have a feeling some young motivated kid is aiming to take down our record and set the bar even higher very soon.

Matt Shryock in the heart of the Chugach Front Range.

When I moved to Anchorage in 2013, I quickly became enamored with the Chugach Mountains. They are an endless year-round playground of peaks to climb, ridges to run, lakes to jump in, and glaciers to ski.  Soon after, a friend sent me a link to Joe Stock’s website detailing the Chugach Front Range Link-Up: https://www.stockalpine.com/posts/chugach-front-linkup.html

Ever since, every run in the Chugach has been another look at a different way to link the peaks.  Only a handful of foolish souls have connected the 12 highest Front Range peaks in a day, most around the 24 hour mark. It wasn’t until Lars Arneson and Peter Mamrol crushed the record (set by Harlow Robinson and Matias Saari) by 4 hours in 2017, that I thought something that fast was even possible.  Side note, Lars and Peter would have gone even faster had they realized they didn’t need to tag Knoya Peak (which is not above 5000 ft) for number 13!

Some folks run it north to south, some south to north, some try it in June before most of the snow melts, we chose July to plan around Mount Marathon.  Most people I’ve talked to have their own theory of which order to link the peaks, which parking lots to start and end with, and what truly self-supported means.  We still debate the different combinations of peaks, and are not certain the order we picked is the best way.  Regardless, part of the unwritten rule of running the Link-Up is not posting your route.  Doing your own homework and exploring the mountains is a big part of the challenge.  So, I’ll post a lot of photos, but sometimes in no particular order, just to mix things up:)

Feeling very humbled by just a few of the peaks.

Still not fully recovered from gutting out everything we had to somehow finish 3rd and 4th in Mount Marathon two weeks before, Matt and I woke up at 3:00 am, July 20, 2018, to make our attempt at the Chugach Link-Up.  Before we left the house, I knew it was going to be an especially hard day.  There was a rare, windless, high pressure inversion, leaving Anchorage in a fog of low clouds and nothing but a calm, intense, blazing sun to beat down on us the entire day.

We left the Rabbit Lake trailhead at 4:12 am.  Before we even started, I put my shirt in my pack since it was already hot before the sun even came up.  Matt took his off after about 15 minutes of running.  We never put them back on the rest of the day.  We ran for a bit over an hour, enjoying the shade of the mountains before the sun crept over the ridgeline.

As we summited our first peak, we experienced one of those elusive, completely calm, bluebird moments in the Chugach where the sunrise illuminated the sky and eastern mountain faces, warming our skin and souls with complete peace.  I could have sat there for hours, but alas, we had some silly record to chase down.  Soon after things heated up quickly.

Dancing along the ridge in the golden light.

We’ve climbed all of the peaks at least once, some dozens of times, and connected them in various ways, so most of the ridges were familiar.  After studying different maps, we decided to try and cut a few tangents, thinking they’d be faster than running back down and around. It’s hard to tell if it would have been quicker to run around vs. down climbing cliff bands to save some distance.  The Chugach is notorious for “rotten” rock, where things look solid until a large rock suddenly moves out of the earth and tumbles away below you.  It was pretty slow going in several places, as one misstep, or grabbing onto the wrong rotten handhold meant plunging several hundred feet, or even several thousand in some places, straight down.

I do not recommend this way.

I supposed now is time for the public safety announcement: by all means, go out and explore, enjoy the mountains, but be careful where you go. Our rule is if our dog (who’s been up every peak in the front range) can’t get up it, we probably shouldn’t without a rope.  Always bring more water, food, clothes, and safety stuff (first aid, space blanket, compass, whistle) than you think you’ll need, and always tell a reliable friend where you’re going and when you plan to be back.  Just because you can see Anchorage, doesn’t mean you always have cell service, and it may take a least 10-20 hours before someone who knows to look for you will be able to help.

As much as the 12 Peak Challenge is about getting to the tops of the 12 5000 foot peaks quickly, it’s also about being in the mountains all day and pushing your limits.  Lucking out to run the Link-Up on a clear, inverted day was bitter sweet. It meant we had to remember to stop and cake on sunscreen every few hours and make a conscious effort to refill water where we could, and seek out every disappearing snow patch to top off our bottles. It also meant we got to experience the Chugach untainted, without site of roads, houses or buildings.  Until we met our friends on the last peak, the only two people we saw were the only other crazy people doing the Link-Up in 2018!  Joe Nyholm and Miles Knotek were connecting the peaks north to south, and we crossed paths almost on top of the highest point, Williwaw Peak.

Williwaw Peak, the top of the Front Range, with Anchorage under a sea of clouds.

Calm reflection of Rabbit Lake. Not a cloud or a ripple.

The key to the Link-Up is to know where the peaks are and to keep moving. Always keep moving as much as possible. It can certainly be done faster, and probably will be soon. But we felt it was important to slow down at times to enjoy the experience.

Stopping a moment to take it all in, and also realizing we have a ways to go.

I took way more photos than I should have.  We spent too much time on every peak, savoring one of the nicest, clear, calm summer days. We of course got a bit lost a few different times, but in the end, it was a perfect day. 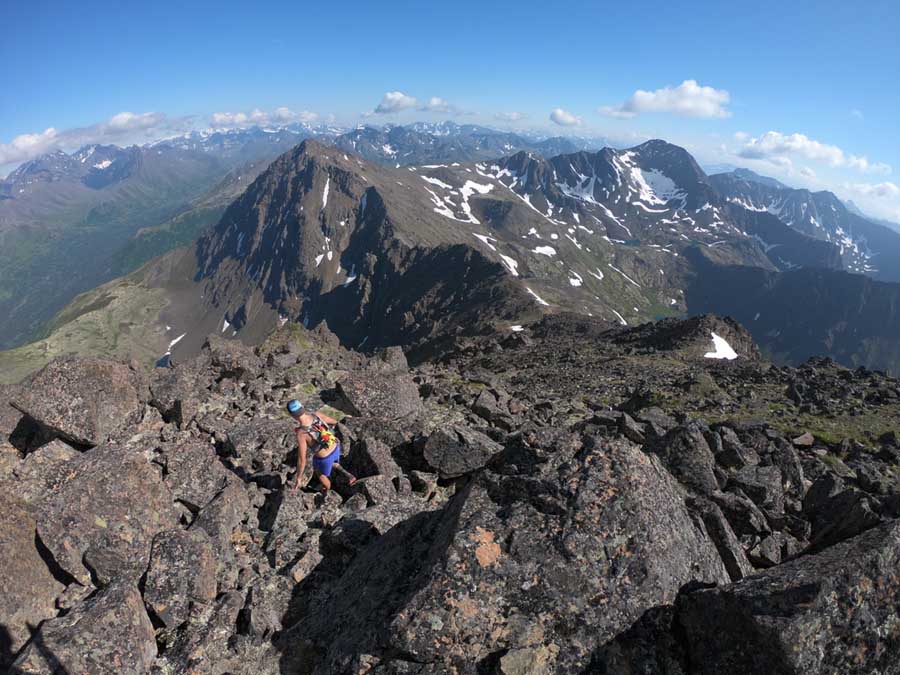 As we were summiting our last peak, we were surprised and welcomed by four of our friends, Lars Arneson and Peter Mamrol (who held the record at that time), Chad Trammell (fellow dentist and 24 hour World Tough Mudder Champion), Scott Patterson (Winter Olympian and Mount Marathon Champ), and Peter’s pup.  When we got to the top, we looked over and saw another, possibly higher point that we had run by thinking we were headed to the final peak.  None of us were sure which was the actual summit, so we figured we’d better climb down, run across the saddle and back up the other peak just in case.

Surprised to see Chad Trammell greeting us in the far saddle.

The run down from the last peak seemed to go on for hours, followed by some endless bushwacking along a typical overgrown Alaska “trail” back to the parking lot.  But having our friends alongside with the end in sight, gave us that extra mental push to keep the pace high.

Descending back to Anchorage with Bee, Peter, Matt, Chad, Scott and Lars.

When we got to the trailhead, 17 hours and 43 minutes after we started, under a still very hot 10 pm sun, it was a pretty magical feeling to have finished what took years in the making.

Above the Anchorage inversion, 3:40 am.

Off to a quick 4:12 am start, in view of North and South Suicide Peaks.

High above the Turnagain Arm.

Not so fun scree descent.

Much quicker way down.

Side hilling is a big part of the Link-Up.

Taking advantage of a goat trail.

Some ridges are not as runable.

A nice contrast from rocks.

Looking ahead is sometimes daunting.

Enjoying the smooth ridge while it lasted.

One of the sketchier spots.

Maybe we should have had a rope…

Cliffed out. See if you can find Matt.

Koktoya is one of my favorites because it has a nice grass patch right on the peak.